There are a number of electrical power generation technologies which are suitable for use on farm.  These options can be compared using the ‘levelled cost of energy’ (LCOE). This is the average price of electricity generated over the plant life taking into account all costs and maintenance required. As it takes into account all costs involved in operating a plant, the LCOE can be compared to prices paid at the farm gate. 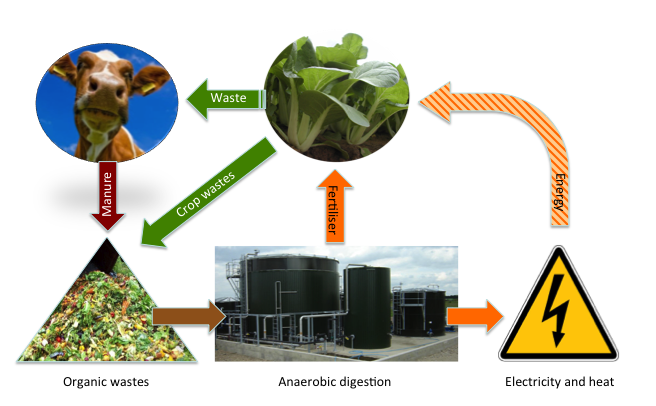 The graph below indicates the estimated current average LCOE for these options. The top of the bar indicates pessimistic pricing while the bottom of each bar shows an optimistic pricing. So for example, the lower value for biomass is based on using waste materials available on farm, while the upper limit shows the potential cost if suitable materials need to be purchased and brought in. Similarly, for wind power the upper limit is based on the turbine operating at 40% of capacity, the lower at it operating at only 10% of capacity.

The analysis of the current financial situation shows that both biogas from waste materials and a natural gas fuelled generator would be consistently financially viable at current prices.

The current carbon price, which has been ignored in this report due to uncertainty in its future, only adds roughly $10-15 /MWhr to the cost of electricity generated from natural gas. However, this option relies on a grid connection to natural gas, making it is feasible only for farms close to urban centres, such as some protected-cropping operations.

Most growers do not have access to the gas network on-site, forcing them to use LPG or diesel for their on-site, engine-based power generation. As shown below for LPG, these fuels are significantly more expensive, and so only appropriate for backup power. 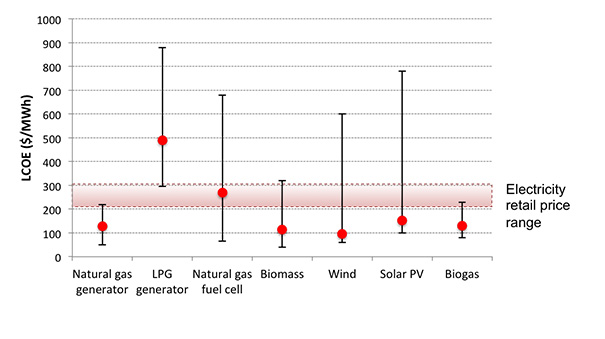 Note that electricity fed back into the grid sells for only $50-$79/MWh
(unless a subsidy is in place, as can be the case for solar and wind power).  This means that MOST power generation options are only worthwhile if the energy is used on-farm.

When the same scenario is modelled for 2030, the results are markedly different – even without any increase in electricity prices (which seems improbable!). The modelled improvements in plant performance and plant cost now result in several technologies – natural gas, biomass, solar PV and biogas – becoming consistently financially viable even if average retail electricity prices remain in the range $200-300/MWhr. Wind may also be viable, depending mainly on the quality of the local wind resource and hence its capacity factor. Again, a price on carbon has been ignored. This only affects the natural gas engine plant, the sole viable non-renewable plant. With the Federal Government’s currently modelled ‘core’ 2030 carbon price of roughly $50/tCO2 adds approximately $30/MWhr to the LCOE of this plant.)

Importantly, this analysis finds that several of these on-site power generation technologies may become viable without any form of incentive in the coming years. Such incentives currently include a price on carbon, renewable energy certificates (RECs) and feed-in-tariffs, all of which face an uncertain future as discussed above. Increases in retail electricity prices will further encourage uptake of alternative power generation options. Overall, this analysis therefore presents a positive view of future, on-farm power generation options in Australia. 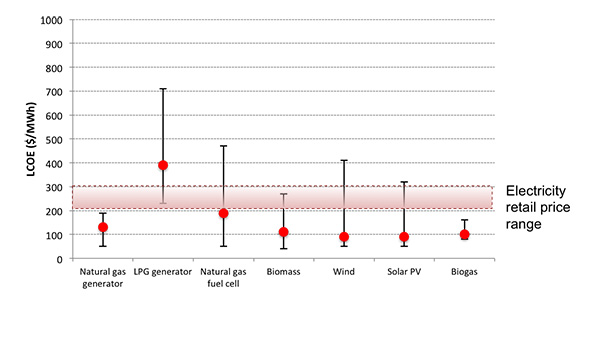 Assumptions made in this analysis;