What happens to the climate in the next 50 years and beyond will depend on both how mankind and the climate system responds.  Models manage this uncertainty by producing a range of climate projections to take account of different scenarios, with their associated greenhouse emission projections.

The changes in climate observed over the last 50 years are projected to continue.  For Australia, our best estimates are that by 2035, the temperature is projected to warm by about 1°C over Australia for the mid-range emissions scenario (NB based on current emissions we will exceed the high growth scenario used by models). Inland areas are likely to experience stronger warming of up to 1.8 °C. 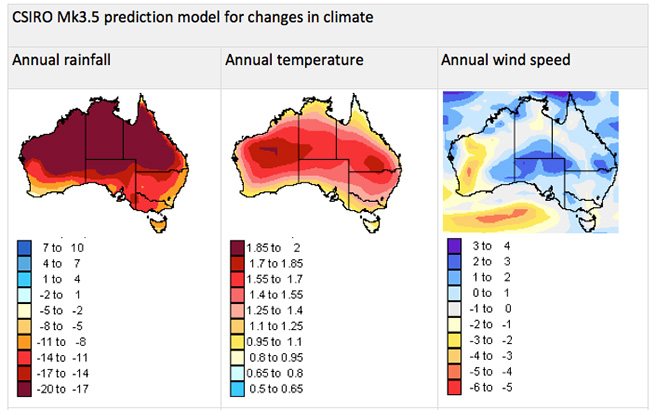 These changes will impact on investments and natural resource decisions made this decade – for example, investment in irrigation infrastructure, biodiversity plantings and water management – and will have implications for the next 20-30 years.

The major impact of increased temperature is likely to be an increase in the intensity and frequency of extreme weather events such as floods, cyclones, droughts and heatwaves. These events, together with the predicted rise in seas levels, will have a far more significant impact on vegetable production than would a 2oC increase in average temperature alone.

In recent years we have been experiencing extreme weather events on a regular basis, which have major impacts on the Australian vegetable production industry. During the 2012-2013 summer no less than 123 climate records were broken. Recent severe events have included:

While individual extreme events can’t be directly attributed to a changing global climate, there seems strong evidence such events are increasing in frequency. It has been predicted by the Intergovernmental Panel on Climate Change that:

Frost is a major risk to vegetable producers. It might be thought that one benefit of increases in the minimum temperature would be to reduce the chance of frost.

Researchers at the Managing Climate Variability have found that the period during which frosts can occur – the frost window – has widened over the last 20 years, particularly in the eastern parts of Australia. This is despite an overall increase in mean minimum temperatures.

The analyses have revealed that in the east the frost window is starting up to 10 days earlier and ending up to 46 days later.

This means that frost will be MORE likely to occur in the future: the risk period will start earlier and finish later.

The pattern of later endings is consistent across much of southern Australia, whereas the earlier starts are more localised to western New South Wales and northern Victoria.

The frequency of extreme cold temperatures is also on the rise across much of southern New South Wales and northern Victoria. An average increase of four frost days and five cold nights each decade has been identified since 1970.

The changes in the frost window, despite increases in mean temperature, are consistent with the expected increases in climate variability. This is due to changes in regional weather patterns. The trend is that the band of high pressure, which normally sits across southern Australia has moved further south and intensified, allowing cold polar air to move onto the continent following the passage of any cold fronts.