In the future, the global warming trend is expected to continue, especially with increasing green house gas concentrations. Changes in temperature, precipitation and carbon dioxide will affect plant growth, reduce the nutritive value of crops and influence the spread of pests and diseases.

Three direct impacts of temperature on vegetable crop production are expected to occur in the next 20 years:

Changes in climate observed over the last 50 years will continue. For Australia, our best estimates are that by 2035, the temperature is projected to warm by about 1°C over Australia. Inland areas are likely to experience stronger warming of up to 1.8°C.

As a result, there will be changes in the number days to harvest crops in particular regions. Crop prediction models have been produced and are used by industry, e.g. lettuce, baby-leaf crops, and processing crops such as sweet corn, beans and peas. The models currently available will remain useful so long as the average temperature predictions used are updated appropriately.

Some market disruptions could result in temporary shortages and/or oversupplies of products, and possible price changes for both consumers and producers.

Fruits and vegetables contain significant levels of biologically active components that impart health benefits beyond basic nutrients. Elevated CO2 has been found to increase concentrations of many biologically active components including sugars, ascorbic acid, phenols, starch, anthocyanins and flavonoids. However, increased CO2 may reduce protein and mineral content in produce. Increased CO2, temperature and water stress can affect photosynthesis, reproductive growth and mineral uptake, which may result in poor growth of vegetable crops. This could lead to lower nutritive values of horticultural produce.

The severity and spread of many diseases is closely related to moisture in the environment. While rainfall is forecast to decrease slightly in some areas, both rainfall and humidity may increase in others, particularly in northern Australia. Such alterations in climate are likely to bring new challenges in terms of disease control.

Certainly, the spectrum of diseases in many regions will change, especially if pathogens have alternate and alternative hosts. As the crops they grow on slowly migrate to new areas, new disease complexes may arise while others may cease to be economically important.  It is also possible that increases in UV-B radiation and/or increased fecundity in elevated CO2 may favour certain strains of fungi or bacteria over others. If crops are stressed by less than ideal growing environments, then they may be more susceptible to such diseases.

Elevated temperatures can suppress defense responses in plant hosts resulting in increased severity of disease. Increased temperatures may also be associated with structural changes in the plant that confer some resistance or sensitivity to pest and pathogen.

Climatic changes may also aid in disease suppression. Warmer temperatures can also lead to increased lignification within the plant, which can protect against pathogen infections. Fewer frost events may also aid in reducing plant disease as frosts can cause injury points on plants, which act as potential entry sites for various pathogens.

Development of target spot on crops such as potato and tomato is strongly influenced by the physiological status of the host. Host susceptibility increases as tissue ages or is stressed due to poor nutrition or root disease. Temperature, relative humidity and hours of leaf wetness modify sporulation, germination/infection and growth of the fungus. 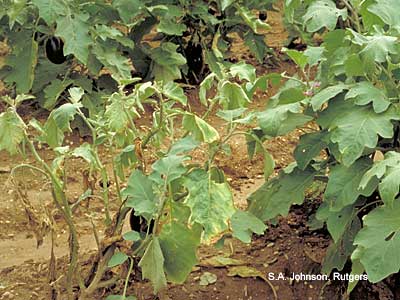 Verticillium wilt affects a range of mainly Solanaceous crops, including eggplant and tomato. Although the pathogen cannot grow without its host, some strains can survive as microsclerotia (long lived resting structures). The strain which can form these microscelrotia is not only more high temperature tolerant, but also by far the most common strain in Australia.

Verticillium wilt is widely distributed in Queensland, in particular on tomatoes and potatoes in the southeast and on peanuts at Kingaroy. It is present on a few tomato farms in the Bundaberg district but is not severe and is not spreading. It does not affect tomatoes at Bowen but occurs in peanut and potato crops in the tropics on the elevated (700 m) Atherton Tableland.

Verticillium wilt in tomato crops can be readily controlled by soil solarisation to raise the average daily maximum temperature at 7.5 cm depth by 10oC. The fungus can be eradicated from infected stem pieces in less than 24h at 45oC. Under climate change this sensitivity to temperature may make this disease less important in marginal areas such as Bundaberg and even the Lockyer Valley.

As with diseases, warmer conditions will enable some pests to spread to areas where they have not previously been able to establish. Conversely, insect pests which were once an issue may become less so.

Temperature can affect the rates of growth, development, and mortality of pests. Elevated temperatures may result in population increases due to shorter life cycles and faster generation times. Higher temperatures result in less cold stress and longer growing seasons for warm climate pests and more heat stress for temperate species.

Queensland fruit fly (Qfly) (Bactrocera tryoni) is an example of where this already appears to have occurred. The traditional range of Qfly was focused on coastal areas of northern NSW and Queensland, extending south just past Sydney. While incursions occurred in more southern and western areas, generally during mid to late summer, the pest was unable to establish permanent populations.

This no longer appears to be the case. Mild winters have allowed Qfly to survive, resulting in population explosions in early spring. This has had major impacts on many fruit and fruiting vegetable producers, especially when combined with the withdrawal of some key insecticides previously used to control the pest. Much of Victoria is now considered endemic for Qfly.

Conversely, hot conditions in summer may be reducing Qfly populations in northern Queensland and the Northern Territory. Qfly does not do well if conditions are hot and dry, even if irrigation is provided. According to CSIRO modelling, increases of 1-2oC will see Qfly disappear from some areas.