The effects of climate change are predicted to vary considerably between regions. Some may benefit, while others will be disadvantaged.

The northern cool season production areas such as Stanthorpe and the Atherton tableland will become more marginal for some winter crops, but may become better suited to others.

Central and northern regions used for winter and transition period production of cool season crops will become more marginal at the boundaries of the seasons (early and late). Examples of these areas are the Lockyer Valley in spring/ autumn for leafy vegetables and brassicas, central highlands and mid western areas of NSW.

Warm season crops in summer production areas will be less affected. There will be some effects on crops such as tomatoes and capsicums where pollination is adversely affected by average temperatures above 27°C, and there will be a marginal reduction in the length of production seasons.

The seasonality of frosts has already changed over the last 20 years, and frost will be more likely to occur in the future.

Changes for each region are presented as means (averages) by month or year. Highs and lows for the period are hidden within the mean, but for vegetable farmers these can be disastrous. A run of very hot weather can damage and downgrade a crop, while an early or late frost can cause complete crop loss. Both events impact the production bottom line. 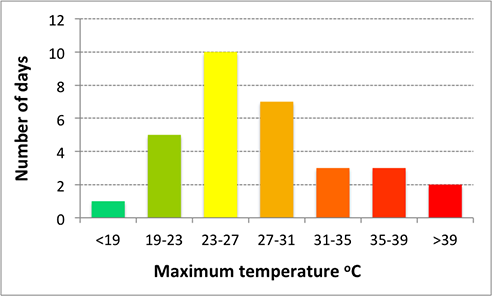 The crops grown in Manjimup during December include lettuce, baby leaf crops, brassicas and potatoes. Temperatures in the 35°C+ range are disastrous for these vegetables and will result in crop failures. In our study, similar scenarios are predicted to increase in frequency in Gatton, Hay, Werribee and Murray Bridge. The only region studied that is not likely to experience increased temperature spikes was Devonport